The majestic tourist destination stands in stark contrast compared to the bustling cities of India. Ladakh can be considered as one of the most unique destinations in the entire world. Ladakh is known as a Union Territory of India which is famous for its expansive motorcycling tours and many other unique cultural experiences which are known to the people of this region.

Apart from the beautiful awe-aspiring lakes, vast scenic views, and rugged raw beauty, Ladakh is also known for its serene atmosphere that is peaceful to behold. The monasteries of Ladakh particularly bring in the sense of calm and peace within you when you visit them. In recent years, the tour operators have been promoting many of their Leh-Ladakh holiday packages where they take many tourists to these monasteries for a visit.

You can find some of the oldest and most beautiful Buddhist monasteries in Ladakh. These monasteries are surrounded by the rugged mountain ranges of Kunlun and the Himalayas. The most common symbol of prayer flags hanging around the monasteries is believed to carry prayers as they flow in the wind.

Many Buddhist monasteries in Leh-Ladakh are used by the monks for their studies and meditation. The different sects of Buddhist monks share their knowledge through their communities. These Buddhist communities take care of the monasteries and help maintain them into self-sufficient centers of study.

You will find various paintings, ancient artifacts, ‘Thangkas’, ornaments, and statues that are relevant to Buddhist culture and tradition. Tourists from all over the world are attracted to these monasteries to study the Buddhist culture. Monasteries in Ladakh became popular in recent years because of the knowledge and ideas they shared with the outside world.

One of the best cultural experiences to have is to attend the Festivals in Ladakh which is held every year in one of these monasteries. These festivals are usually the important days in the Tibetan calendar which have astrological and cultural importance. These festivals include many different dances, chanting ceremonies, and fire ceremonies which are some of the great experiences to have as a tourist. 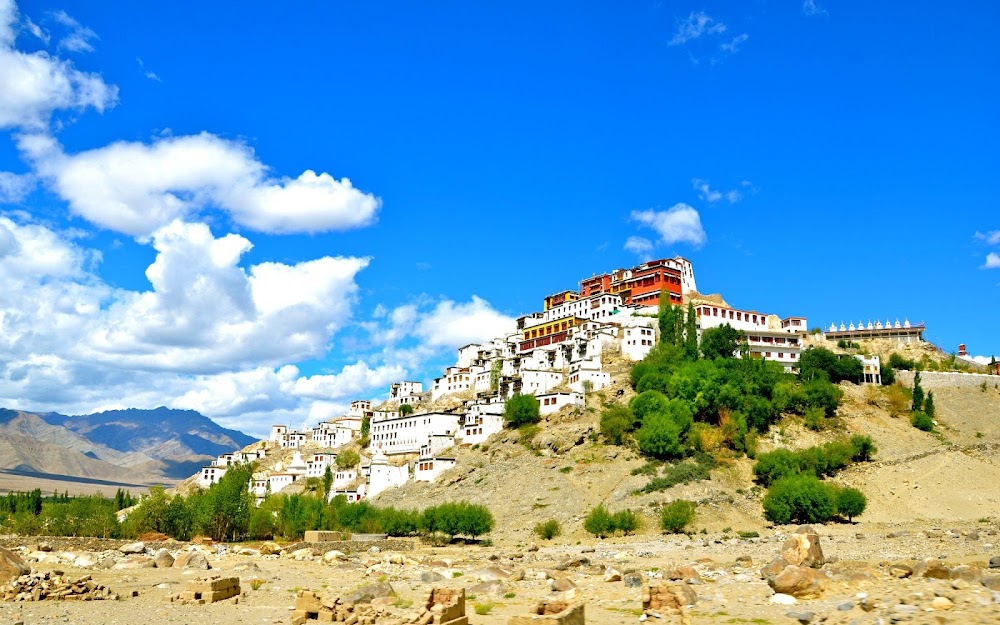 Thiksey monastery is managed by the Gelugpa Tibetan Buddhist sect which is known by the monks who wear tall yellow hats. This monastery is full of various important Buddhist texts, ornaments, paintings, and stupas, etc. These things are very precious to the Buddhist culture and its tradition. It represents Buddha’s teachings in various forms of expression.

The famous Thiksey Gustor Festival is held every year during October and November. The festival includes masked dancers dancing the sacred Cham dance. Hundreds of tourists visit to attend this festival from all over the world. You easily avail of any of the Leh-Ladakh packages offered by the travel agencies which include a visit to this beautiful monastery. It is also one of the monasteries to stay in Ladakh as a tourist. 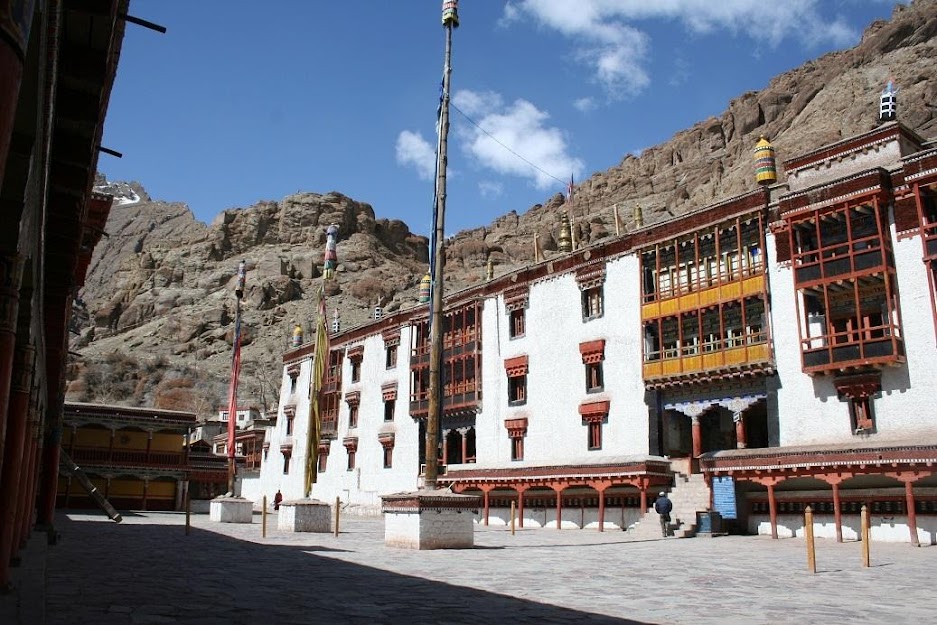 Hemis Monastery can be reached by traveling around 50 kilometers away from the city of Leh. The monastery was built in the year of 1630. This monastery is dedicated to Naropa, who is considered as one of the enlightened Buddhist masters. Decorated by the prayer flags, this monastery is one of the most famous monasteries in Ladakh.

The Hemis Monastery is dedicated to the Drukpa Buddhist community who maintains and manages the day-to-day workings of the monastery. This monastery houses many of the ancient relics, Thangka paintings, and gold and silver stupas because of which it is considered to be one of the richest Buddhist monasteries in India. 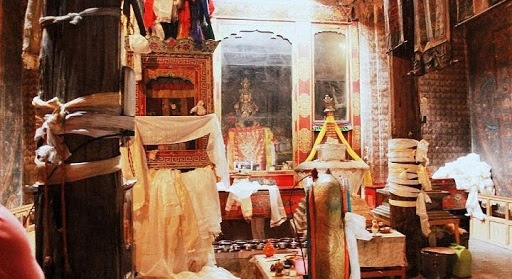 Alchi Choskor Monastery is one of the most popular monasteries in Ladakh full of ancient sculptures, documents, books, and artifacts. This monastery is divided into three sections and is considered a learning center for Buddhist scholars.

Unlike other monasteries in Ladakh, this monastery is not built on a hill but instead constructed on a plain. One of the main features of this monastery is the Boddhisattva statue with 2 storeys tall. Other statues of Maitreya Buddha, Manjushri, and Avalokiteshvara are also constructed on the ground floor of the monastery. You can also find a sculpture of Rinchen Tsangpo in the monastery.

Suggested Read: Plan a Bike Ride to Leh-Ladakh in 2021 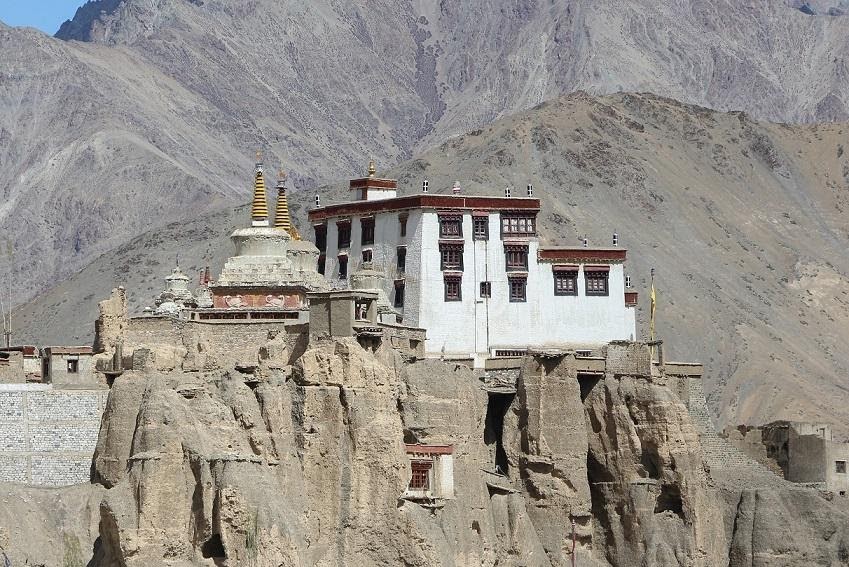 The Lamayuru monastery is one of the oldest Buddhist monasteries in Ladakh which is believed to be built in the 11th century. This monastery was also believed to be a place for meditation for Naropa who is considered as one of the enlightened masters in Tibetan Buddhism.

This monastery is roughly 130 kilometers away from Leh city. Lamayuru is also one of the largest and the famous monasteries in Ladakh. This monastery belongs to the Nyingma Buddhist community which is popular for wearing the long red hats. The monastery is home to around 50 monks who stay here.

As a tourist, this monastery is one of the monasteries to stay in Ladakh. Also, you can find many old paintings, sculptures, and relics dating back to the time of its construction. The sacred masked dances are performed during the 5th month of the Tibetan Lunar calendar.

Suggested Read: Best Things To Do In Ladakh 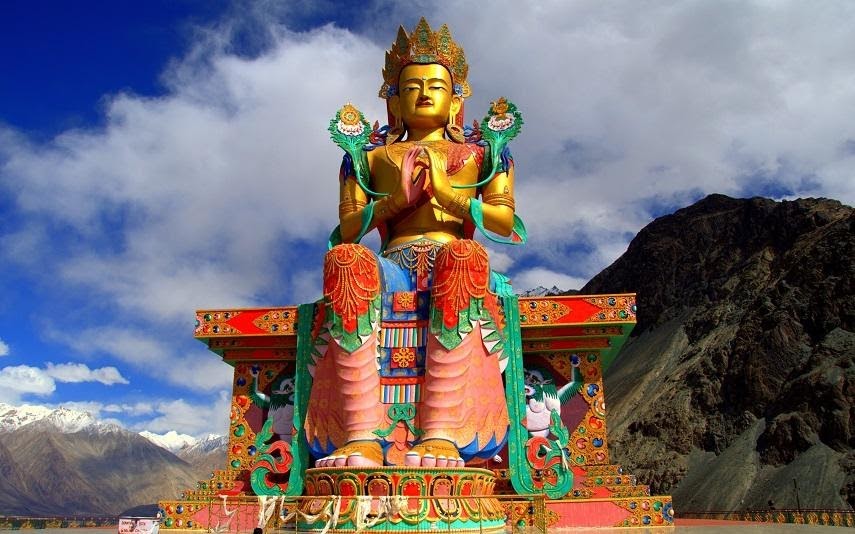 Diskit is one of the oldest Buddhist monasteries in Ladakh which was built around the 14th century. This monastery is dedicated to the Gelugpa community of Buddhism. Diskit monastery is located at the height of around 3100 meters overlooking the gorgeous Nubra valley. of Tibetan Buddhism which is located in the beautiful Nubra Valley.

This Tibetan monastery in Ladakh is famous for its Buddha statues and a large drum that is built here along with other statues of the guardian deities. The very location of this monastery brings in a sense of peace and tranquility.

The popular festivals of Dosmoche in February every year attract hundreds of tourists from all over the world. One of the most defining features of this monastery is the statue of the ‘Crowned Buddha’ known as Cho Rinpoche in the prayer hall. The motorcyclists on their bike trip usually visit this monastery on their way to Nubra valley.

To visit this monastery you will have to trek a little to reach its door. The experience of attending the morning prayers in the Diskit monastery is an experience that cannot be expressed in words. 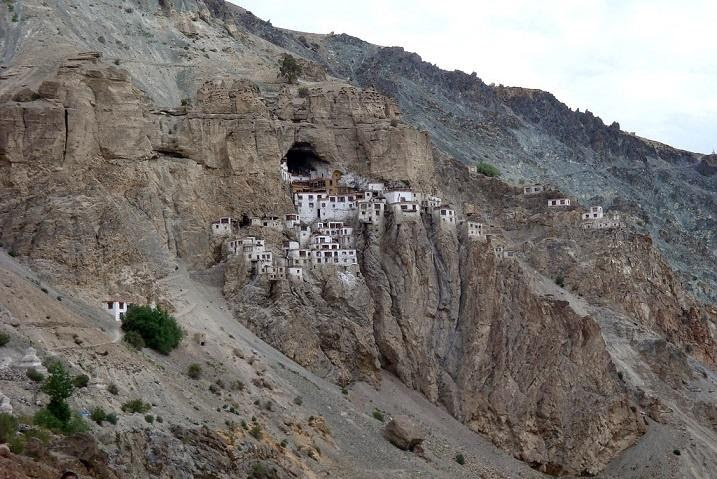 Situated on top of a cliff this monastery can only be reached by trekking to it. The view from this monastery is truly breathtaking. During certain times of the year, you can see some of the most scenic views of the green valley, mountains and the beautiful rive of Lungnak. Due to its remote location, you might not find this monastery included in the popular Leh-Ladakh package. 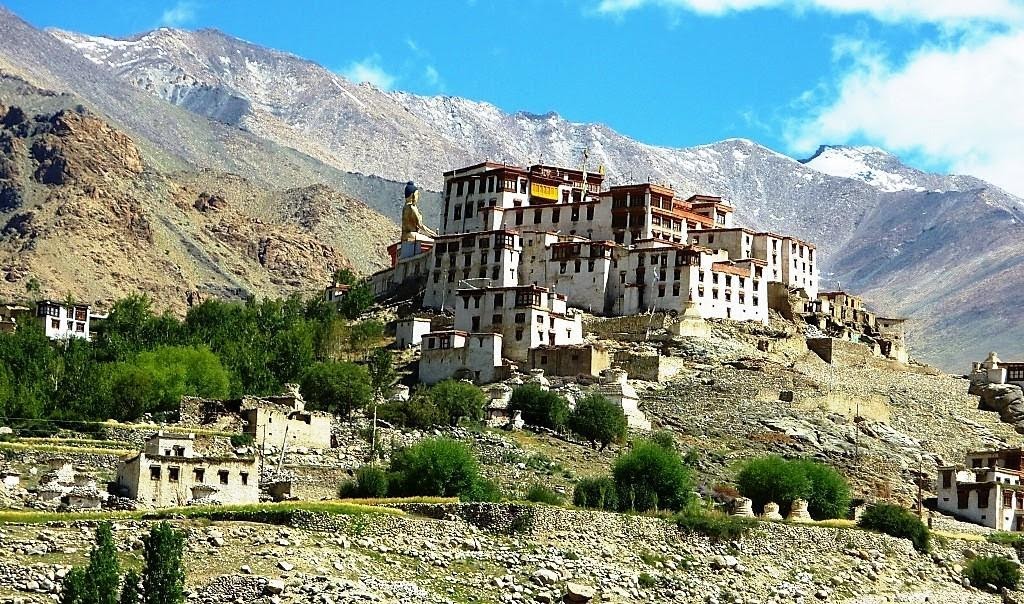 Established in the 14th century by Lama Dowang Chosje, Likir Gompa is situated at a distance of around 55 kilometers from the city of Leh. This monastery is located in the village of Likir in the Indus Valley. Likir Gompa is one of the most popular monasteries in Ladakh among the tourists.

The Likir monastery is believed to be one of the first construction by the Tibetan monks in northern India. The monastery has a museum that houses ancient artifacts and relics from 11th century Tibet. Likir is also one of the oldest monasteries of Ladakh which is dedicated to the Gelugpa (Yellow Hat) sect of Tibetan Buddhism.

This monastery still holds many teaching ceremonies available to the general public. These teaching sessions are attended by visitors from all over the world. The famous annual festival is celebrated every year with hundreds of people attending it. This festival includes various rituals and sacred dances that are the main attraction of this event.

The monasteries in Leh-Ladakh have become a popular tourist attraction and some of them also convey Buddhist teachings to the world through their public lectures. The atmosphere of a monastery can enrich your mind with peaceful and calming vibes.

If you are traveling to Ladakh on a motorcycle, you can find some of these on your way. You can visit these monasteries and explore the influence of spiritual ideas in the Buddhist religion. The other popular attractions near these monasteries include the famous lake of Pangong Tso, Lungnak, and Nubra Valley.

If you are searching for a place to experience meditation or a peaceful stay, then visiting these monasteries in Ladakh is the best way to enrich your travel experience.