Ladakh is an Indian Union Territory located in Northern India. It is considered to be one of the most fascinating tourist destinations in India. As the name suggests Ladakh is a land of several high mountainous passes. It’s popular worldwide for its breathtakingly beautiful landscapes, serene lakes Ladakh, and Buddhist Monasteries that are architectural masterpieces.

Summers are the best time to visit Ladakh as favorable weather conditions at this time of the year provide an excellent opportunity for tourists to explore this picturesque destination.

One can only reach Ladakh via Air or Road transfer as there is no train station in Ladakh. The nearest train station to Ladakh is Jammu Tawi station which is about 700 km from Leh. One can easily get a bus or taxi from the railway station to reach Ladakh. It would take approximately 16 hours.

The closest airport to Ladakh is KushokBakulaRimpochee Airport in the city of Leh. Flights to Ladakh are easily available from all major cities of India. Air transfer is one of the most convenient and time-saving ways to reach Ladakh.

Another widely used and adventurous way of reaching Ladakh is by road. Buses are available from both Himachal Pradesh as well as Jammu & Kashmir to reach Ladakh. You can reach Ladakh either through Manali – Leh highway or Shrinagar to Leh highway. Both are time-consuming as well as combatively risky due to the difficult mountainous terrain.

Once you reach, there are a variety of things to in Ladakh including wandering in the beautiful valleys of Leh, exploring local monasteries, visiting mesmerizing lakes, night camping, adventure sports, and a lot more.

It is a perfect honeymoon destination for couples who want to experience the beauty and serenity of the vast panoramic mountains away from the city hustle. Most of the Leh Ladakh packages for couples include such destinations.

11 Best Things to do on a Ladakh Trip

3. Visit the Royal Palace of Leh

6. Experience the magic at Magnetic Hill

7. Gaze at the moon & stars while Night camping

10. Relish the traditional delicacies of Ladakh

Pangong Lake is about 160 km long saltwater Lake located in eastern Ladakh at a height of approximately 14000 ft. One-third of this Lake is in India and the other is a part of China. It is one of the most popular tourist attractions of Ladakh.

Pangong Lake is an unbelievably beautiful Lake with crystal clear blue water. Spending even a few minutes sitting by the side of this pristine Lake automatically calms your mind and provides a sense of peace and tranquillity. This is the reason why Pangong Lake tops the list of all LehLadakh Sight Seeing Packages.

Visiting Pangong Lake is one of the top things to do in Ladakh for most Indian tourists also because it was featured in the blockbuster Bollywood movie “Three Idiots”. Lots of tourists can be seen enjoying taking selfies on the very spot where the climax scene of this movie was shot. 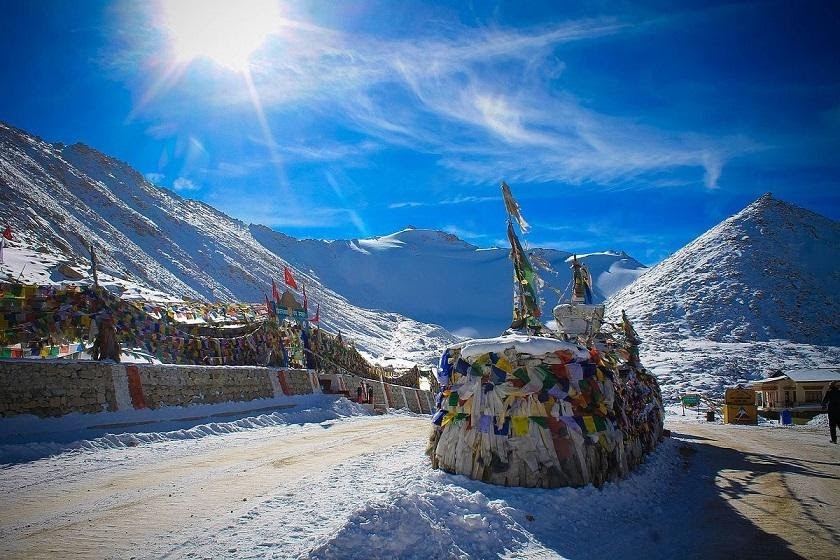 Bike riding through Khardung La pass is one of the most adventurous things to do in Ladakh. The moment you reach the top and read the signage of “Khardungla Top - highest motorable road in the world” a great sense of achievement immediately sets in. If you are an adrenaline junkie then your trip to Ladakh will be incomplete without this bike ride adventure.

3. Visit the Royal Palace of Leh 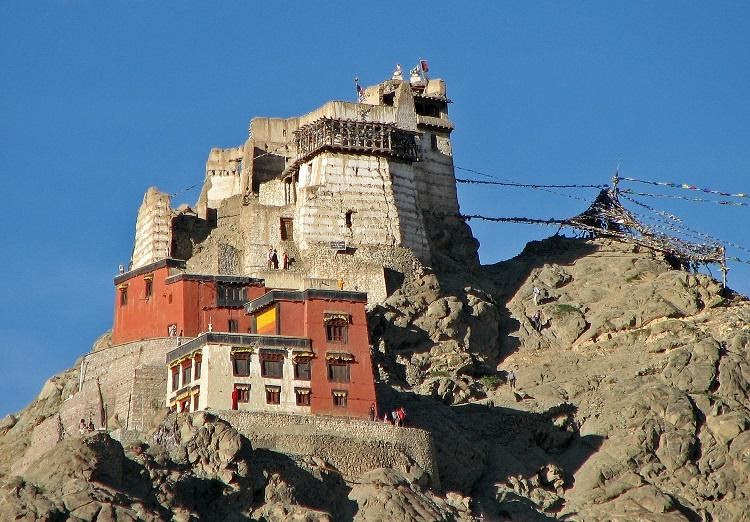 For History lovers, one of the vital things to do on a Ladakh trip is to visit the Royal Palace of Leh. The historical Royal palace of Leh was constructed in the 17th century by SenggeNamgyal to serve as a residence to the former royal family. The wonderful architecture of this nine-storied palace has similarities to the Tibetan architecture of Potala Palace in Lhasa.

This is palace is simple yet striking at the same time. For those tourists who love visiting historical monuments, visiting this palace will be an amazing experience. The palace also has a museum full of historical paintings, antiques, and other extraordinary artifacts.

The palace is very easily approachable as is only about 2 km away from the main city of Leh. The visitors are allowed from 9 am to 4 pm. 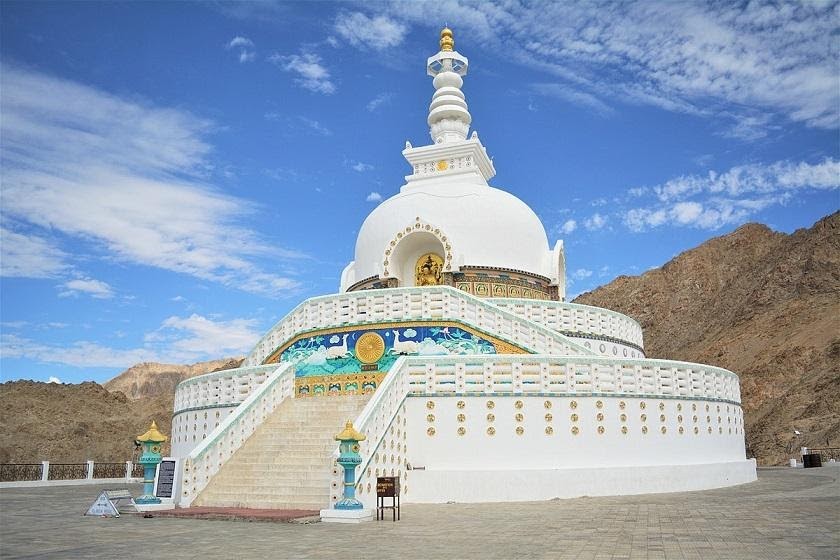 If you are looking for a spiritual experience that fills you up with peace and positivity then you must visit Shanti Stupa. Visiting Shanti Stupa is one of the most wondrous things to do in Ladakh. It is located on Chanspa hilltop in Leh and was built in 1991 by Japanese Buddhists.

It is one of the seven Shanti Stupas built by Buddhists as a symbol of peace.Shanti Stupa is also popular due to its religious significance. The Stupa is a two-storied construction and it also has a meditation hall for those who want to indulge in the spiritual experience of meditation.

Shanti Stupa can be reached conveniently by tourists as it's only 13 km from the center of Leh city. Due to its religious and spiritual significance worldwide visiting Shanti Stupa is one of the best activities to do in Ladakh. 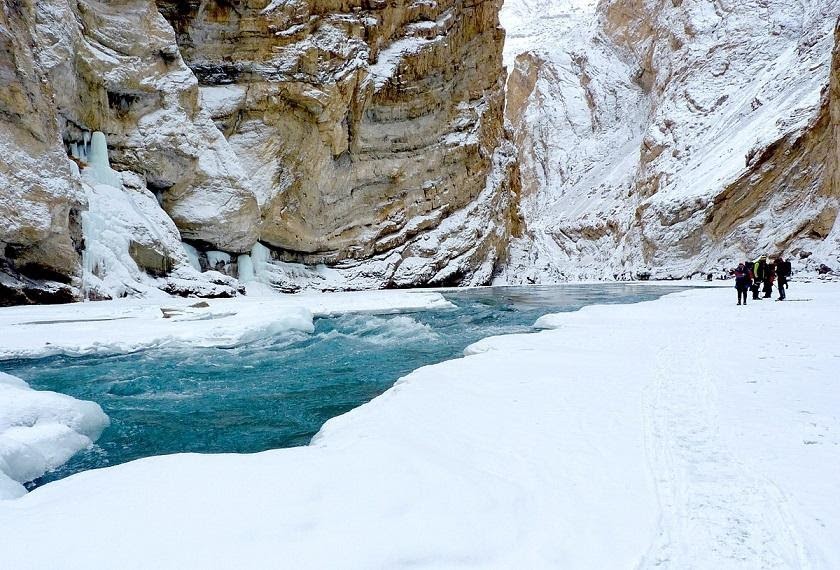 If you are curious about adventurous things to do in Ladakh then Chadar Trek is a must on your list. This is a winter trek and the best time to go for it the month of February. This trek is over the Zanskar River which is frozen during this time of the year. This trek is approximately 62 km long and it takes about 8 to 10 days to finish this trek.

This is one of the most popular things to do in Ladakh in the winter season. This is not an easy trek and requires a lot of preparation. The difficulty level is very high and unpredictable weather conditions can create enormous challenges for those who choose to go for this trek.

Despite being difficult is one of the most popular choices for adventure lovers and those who want to enjoy the panoramic beauty of the snow-clad fringes of Ladakh. Most of the LehLadakh holiday packages that are designed for hilly-adventures during winters include this Trek.

6. Experience the magic at Magnetic Hill 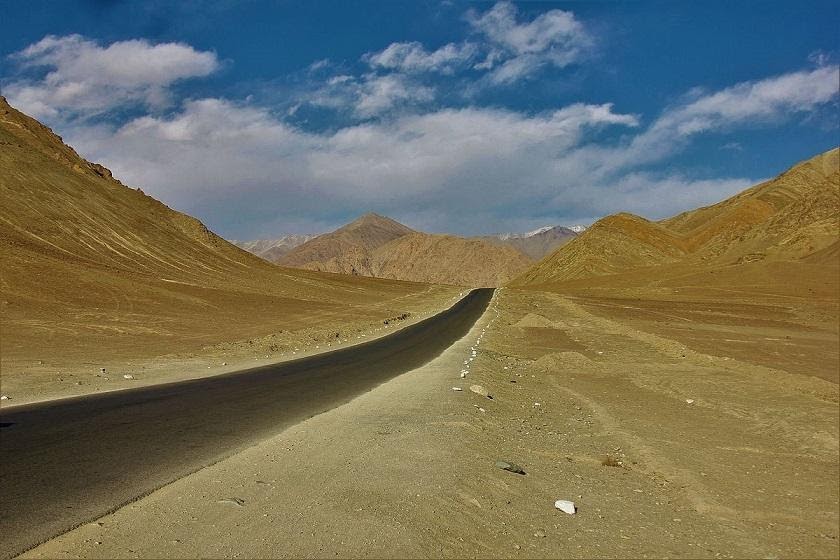 If the idea of witnessing magic excites you then one of the most exciting activities to do in Ladakh for you would be visiting this magical Magnetic Hill. This hill is located 30 km away from the city of Leh.

This road is believed to have strange anti-gravitational magnetic abilities. When the car is parked in neutral gear on this road it starts moving up the slope by itself at a speed of about 20 km/hour.

Each year many travelers come to this hill to witness and record this magical phenomenon. It is still debatable whether the hill has magnetic abilities or it’s just an optical illusion. Those looking forward to this magical experience must include a trip to Magnetic Hill in their list of things to do on a Ladakh Trip.

7. Gaze at the moon & stars while Night camping 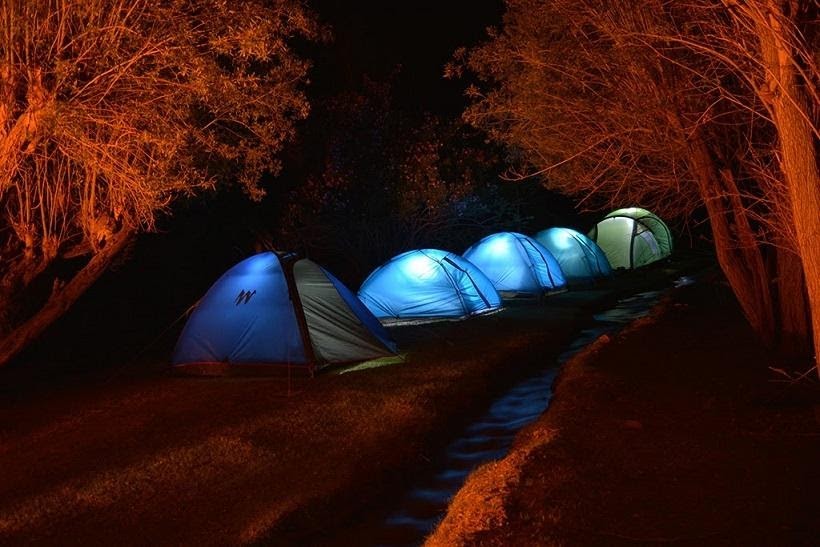 If you are traveling as a couple then one of the best things to do on a Ladakh trip is Night Camping. Camping at night can be an amazing experience in Ladakh. The most famous camping site in Ladakh includes Nubra Valley, on the side-lines of Pangong Lake and Tso Moriri.

The beauty of the night sky in Ladakh cannot be described in words. The sky is full of countless stars and you can see the belt of the Milky Way. If you are a couple looking for a fascinating night adventure then this could be the perfect experience for you. Most of the LehLadakh packages for couples include Night Camping alongside the lake. 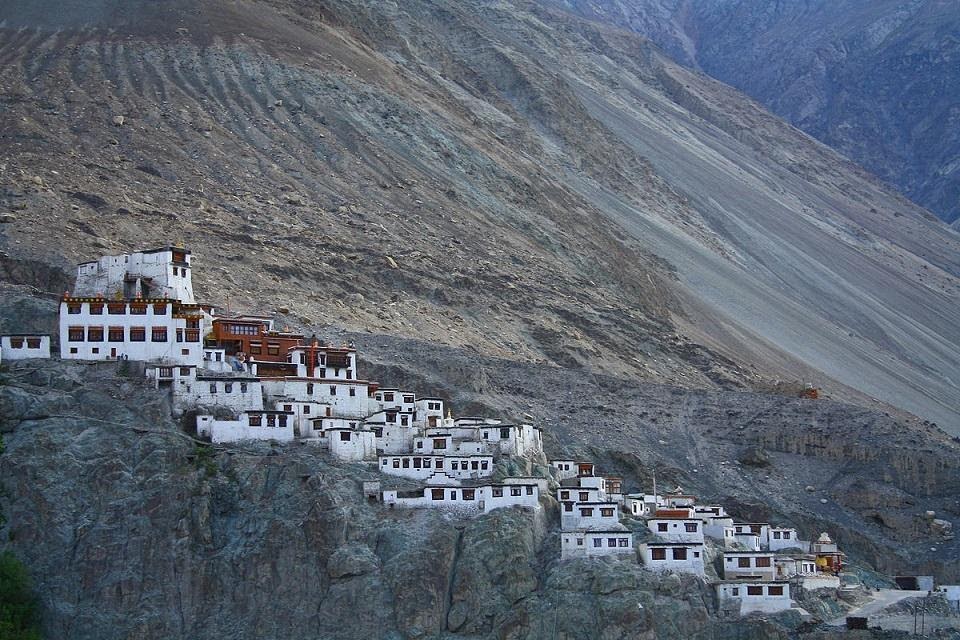 This monastery was built around the fourteenth century. It is the largest and oldest Buddhist monastery located in the Nubra Valley of Ladakh. This monastery is popular mainly because of the huge 108 ftMaitreya Buddha statue on top of it. The statue of Maitreya Buddha took 6 years to be constructed and was inaugurated by HH Dalai Lama. It is believed that this statue is a symbol of protection and peace.

This Monastery is around 125 km away from the center of Leh city. The Monastery has beautiful architecture outside and inside. The walls inside are full of eye-catching illustrations of Buddhist deities. The panoramic view of the valley from inside the monastery is amazing. Visiting this beautiful monastery is one of the top things to do in Ladakh. 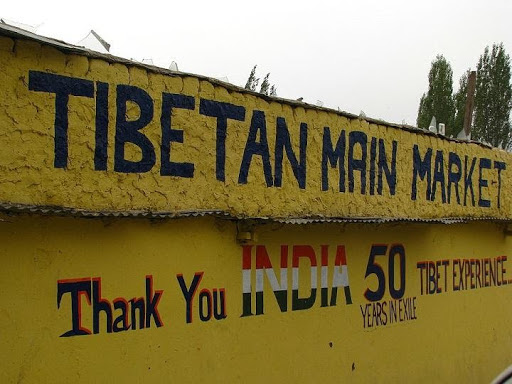 One of the shops in the local Ladakh market (image source: Wikimedia Commons)

For tourists who love to explore the local culture wandering in the streets and local markets can be one of the most wondrous things to do in Ladakh. One of the most popular markets of Ladakh is the “Main Bazaar” located in Leh. In this Bazaar, you can find most of the famous stuff like Silver Jewellery, Himalayan Pashmina shawls, Tibetan Handicrafts, LadakhiJewellery, and carpets.

Tibetan Handicrafts are one of the most popular things in Ladakh. If you want to shop specifically for Tibetan clothes, artifacts, and handicrafts then “Moti Bazaar” is the place for you. It is located a little away from the main city but the stuff that you can get here is of really good quality.

There is a lot more to explore in these local markets of Ladakh and you must take out one entire day from your itinerary to explore these markets.

10. Relish the traditional delicacies of Ladakh 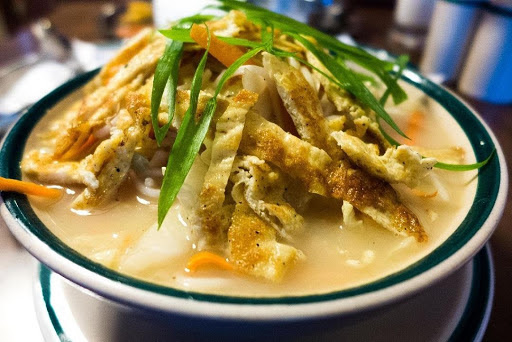 For food lovers, one of the best activities to do in Ladakh is to taste the local delicacies. The traditional cuisine of Ladakh has its roots in Tibet. Dishes with Tibetan influence that are popular in Ladakh include Momos (dumplings stuffed with minced meat, vegetable or potatoes), Thukpa (vegetable & noodle soup), Skyu (wheat dough stew), Tingmo (Tibetan Bread).

By far Momos is considered to be the most flavourful dish in the cuisine of Ladakh. They are dumplings that are usually filled with minced meat, a vegetable like cabbage, and potatoes. Momos are generally served hot with a spicy red chili sauce over them. Those who love spicy foods must try this delicacy from Ladakh. Those with a sweet tooth must enjoy the Jam made with locally grown Apricots. Apricot Jam made with locally grown Apricots is one of the most popular things in Ladakh that you can take away as a gift for your friends.

Other than the local dishes one must try the much famous Yak cheese also known as “Chhurpi”. Yak cheese is made from the Yak milk and tastes similar to the Ricotta cheese from Italy. Coming to the beverages when in Ladakh one must try Butter Tea which is made from Yak butter, water, tea leaves, and salt. This is traditional tea from Tibet which locals enjoy and it is also served to the guests and also at Tibetan weddings. 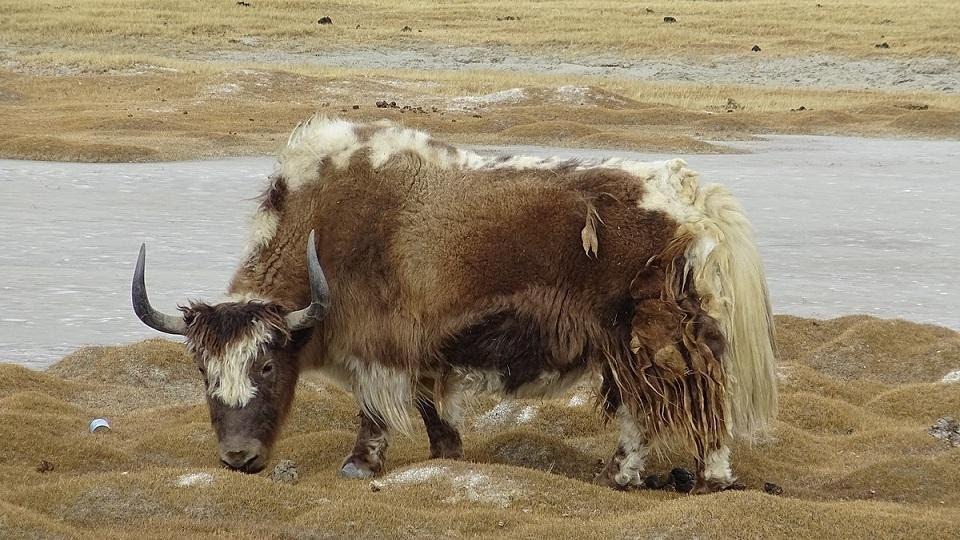 Yak Safari is one of the most exciting activities to do in Ladakh. Yaks are animal gigantic animals found in the cold deserts. They have been domesticated by the locals for thousands of years now. Yak Safari is one of its kind experience only available in a few places including Ladakh.

Exploring the valley of Ladakh sitting on a Yak can be a unique experience. You can easily book a Yak Safari in Leh through a local travel agent. The Safari lasts for about 4 hours where you can witness some of the most stunning landscapes and observe local flora and fauna. However one needs to alert and careful as this an animal with great strength. 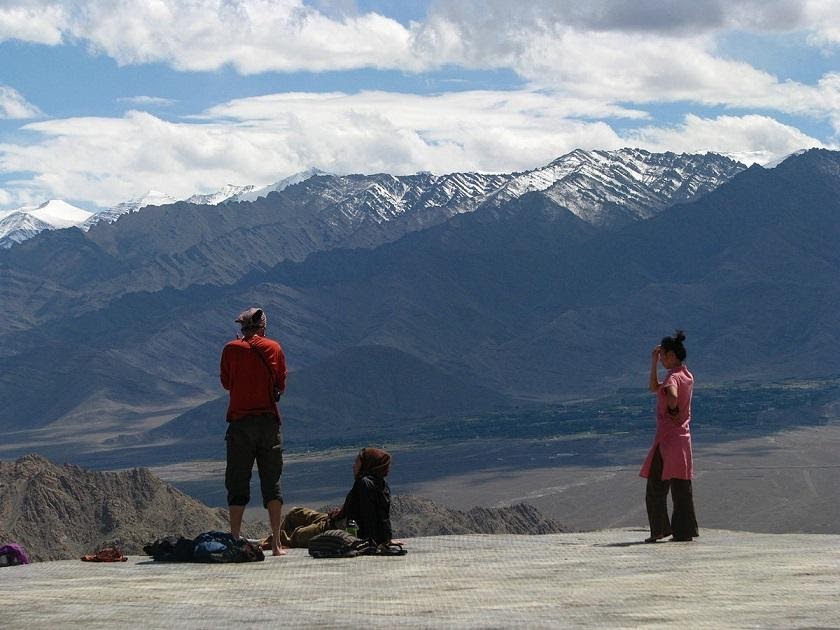 Ladakh still remains as a great choice for traveling. It provides many opportunities to explore the unique culture of the Ladakhi people and the amazing raw beauty of its cold desert areas. The people here live in extreme conditions while preserving their ancient traditions and rituals. For you next vacation, Ladakh is an ideal choice to escape the boredom and monotony of daily work life.