India as a tourist destination is full of adventure tourism opportunities where tourists can find many adventure sports to participate in. India has a diverse range of geographical locations ideal for adventure sports such as Skiing, Surfing, Snow-Mobile Riding, Sky Diving, Bunjee Jumping, and many more.

The tour operators located in different parts of India promote many adventure tour packages ideal for both beginners and experts. For example, one of the most sought after adventure sports destination of Himachal Pradesh is known for several adventure tourism options.

Both Summer and Winter season have their list of adventure sports to experience. Adventure sports such as Skiing and Paragliding are some of the most adventure activities that are included in any popular Himachal adventure tour package.

10 Spots for Paragliding in India

One of the most popular adventure activities that has gained a lot of popularity among young travelers in India is that of Paragliding. Paragliding offers an amazing experience of flying like a bird through the majestic vistas of India.

The feeling of gliding over the landscape is incomparable to other extreme sports like Bunjee Jumping and Sky Diving as these sports are a very intense experience. Paragliding is more of a relaxed experience where a person can glide in the air and watch the world below. The feelings of the paragliders get intense only during the take-off and the landing phases.

Sometimes, paragliding is confused with Parasailing which involves the person being tethered to a motorboat and then sailed across the sea. Paragliding is more of an untethered experience where the person is free to steer and glide at the height of his/her preference. Paragliding has become a necessary addition to many popular Himachal holiday packages. Bir-Billing is one of the most preferred spots for Paragliding in India. It is located in the beautiful state of Himachal Pradesh. Among the Paragliding enthusiasts, it is known as the ‘Paragliding Capital’. This beautiful lush green destination provides the ideal climate for this adventure sport.

Bir and Billing are two villages located near the town of Dharamshala in Himachal Pradesh. Bir is known as the take-off site for the paragliders and the Billing is the landing site. Bir-Billing is a popular destination for Paragliding in India for both domestic and international tourists. Most international paragliding enthusiasts visit this site for its serene location and natural beauty.

Bir-Billing being close to the popular town of Dharamshala which is famous for being the residence of His Holiness Dalai Lama is the first choice for tourists.

This site gained a significant rise in its popularity due to the recent International Paragliding World Cup event help in 2015. In this event, many Paragliding experts from around the world compete against each other. It is also expected that another World Cup event will be helpful here in the coming years.

Bir-Billing can be reached easily by bus or taxi from the closes airport in Dharamshala. The best time to take part in Paragliding is throughout the year except for the months of monsoon with rainy weather conditions.

Tourists can avail of paragliding services here at costs between 4000 – 6000 Indian Rupees. There are many operators located here who can offer Paragliding activity or create a custom Himachal adventure tour package as per your budget. 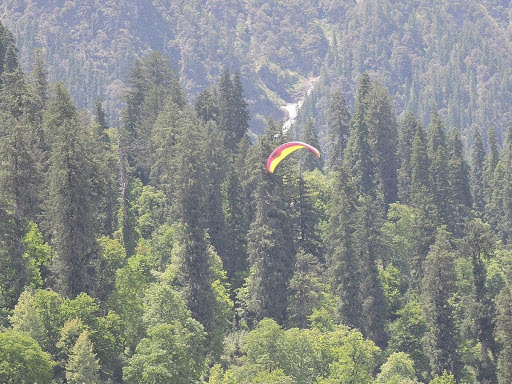 Manali is clearly among the top tourist destinations among domestic Indian tourists. This beautiful hill station is full of tourist attractions and activities ranging from adventure sports to honeymoon destinations.

Tourists visiting Manali either stay here or go beyond this hill station to the destinations such as Leh and Ladakh. Many travel agencies add Manali as a stopover destination for their Leh Ladakh trip package. Young travelers who ride to Leh and Ladakh on their motorcycles spend a significant amount of their time in Manali.

Located at a height of around 6000 feet above sea level, Manali is one of the best sites to paraglide in India. The beautiful valley of Manali offers magnificent views that remain etched in your memory for years.

Manali is very well connected to the rest of India and can be easily reached by Road and by Air. The price of Paragliding here varies from operator to operator. The minimum known price for Paragliding is around Rs. 2000.

Also Read: Must to visit Lakes in Himachal Pradesh

Arambol beach is one of the most famous areas in Goa. It is an ideal spot for paragliding in India because of its international popularity and weather conditions. Tourists from all over India and abroad visit Goa for a relaxing vacation.

Paragliding in Goa is quite a recent phenome that has gotten increasingly popular in the last 5 years. The area around the lake of Kalacha is one of the famous destinations for paragliding in Arambol.

If you wish to add a little adventure to your relaxing vacation in Goa, then paragliding is a good sport. The best time to paragliding is from October till June. Only Tandem flights (with instructors) are allowed here and trained instructors are available here as well. 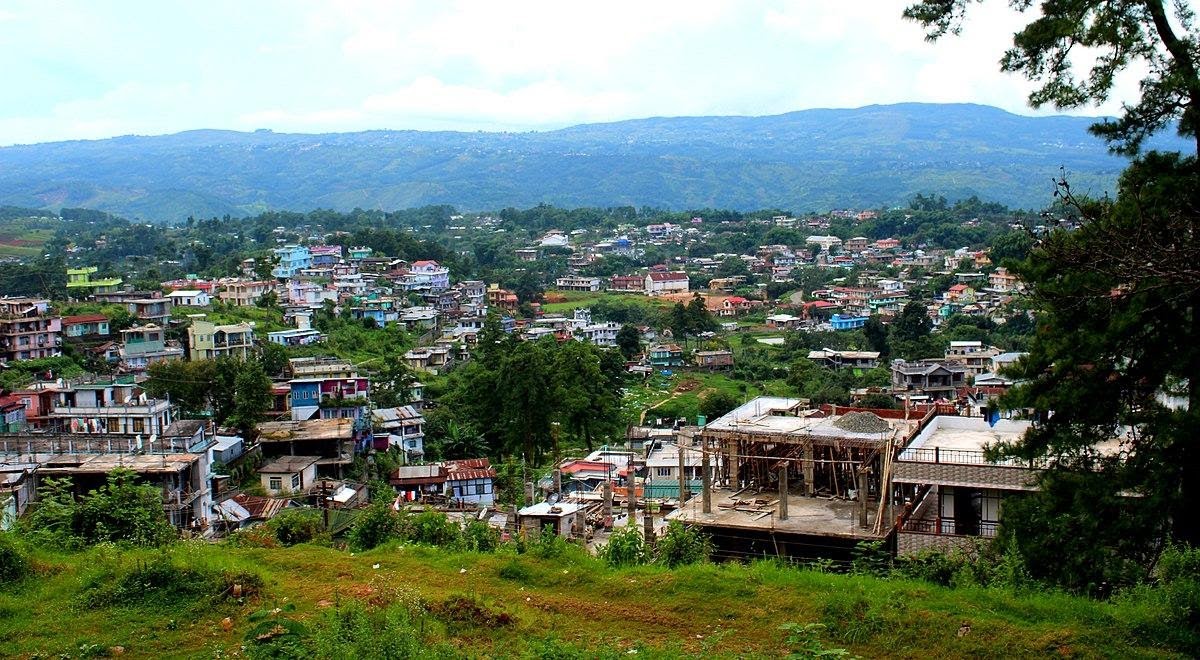 This northeast Indian gem of a place is famously known as the ‘Scotland of East India’. Blessed with the heavenly beauty of the mountains, rivers, and bio-diversity of its valleys, Shillong is one of the most beautiful paragliding places in India situated at the height of 1,400 meters above sea level.

Shillong is a popular travel destination known for its lush green landscape. Paragliding here recently started and gained popularity very rapidly among the young Indians. Many thrill-seeking travelers engage in the sport of Paragliding.

Shillong got an increased number of tourists in the past few years due to many tourism-related initiatives taken by the government. Many tour operators managed to gain a good following through the promotion of their businesses through Social Media. This has resulted in the birth of new adventure tourism activities in the region.

The instructors available in Shillong are very well-trained individuals who use state-of-the-art gear and communication equipment. These expert instructors continue to raise their level of expertise. They do it through the regular practice of flying at a greater height which is only experienced by Professionals.

Also Read: Things to do in Punjab 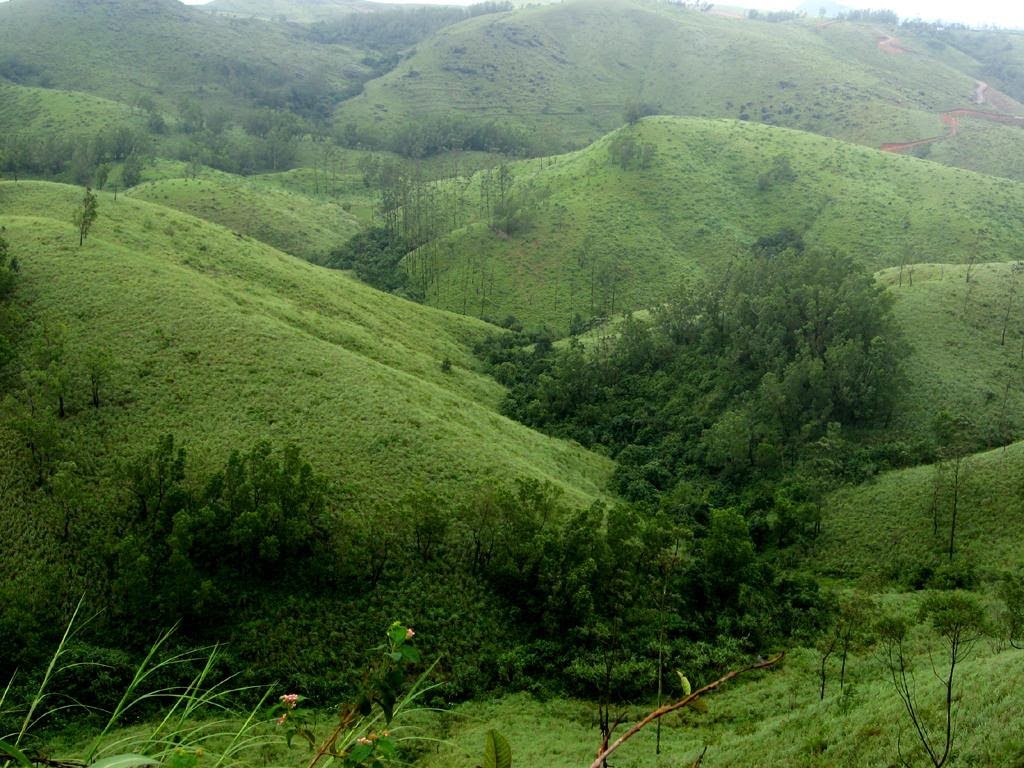 Vagamon has the perfect climate which makes it an ideal spot for paragliding in India. All the instructors are well trained and provide Tandem paragliding flights to the tourists.

Vagamon is easily accessible from the main airport of Cochin. The tourist season for experiencing paragliding starts from October to March. There are no Paragliding activities during the heavy monsoon season. 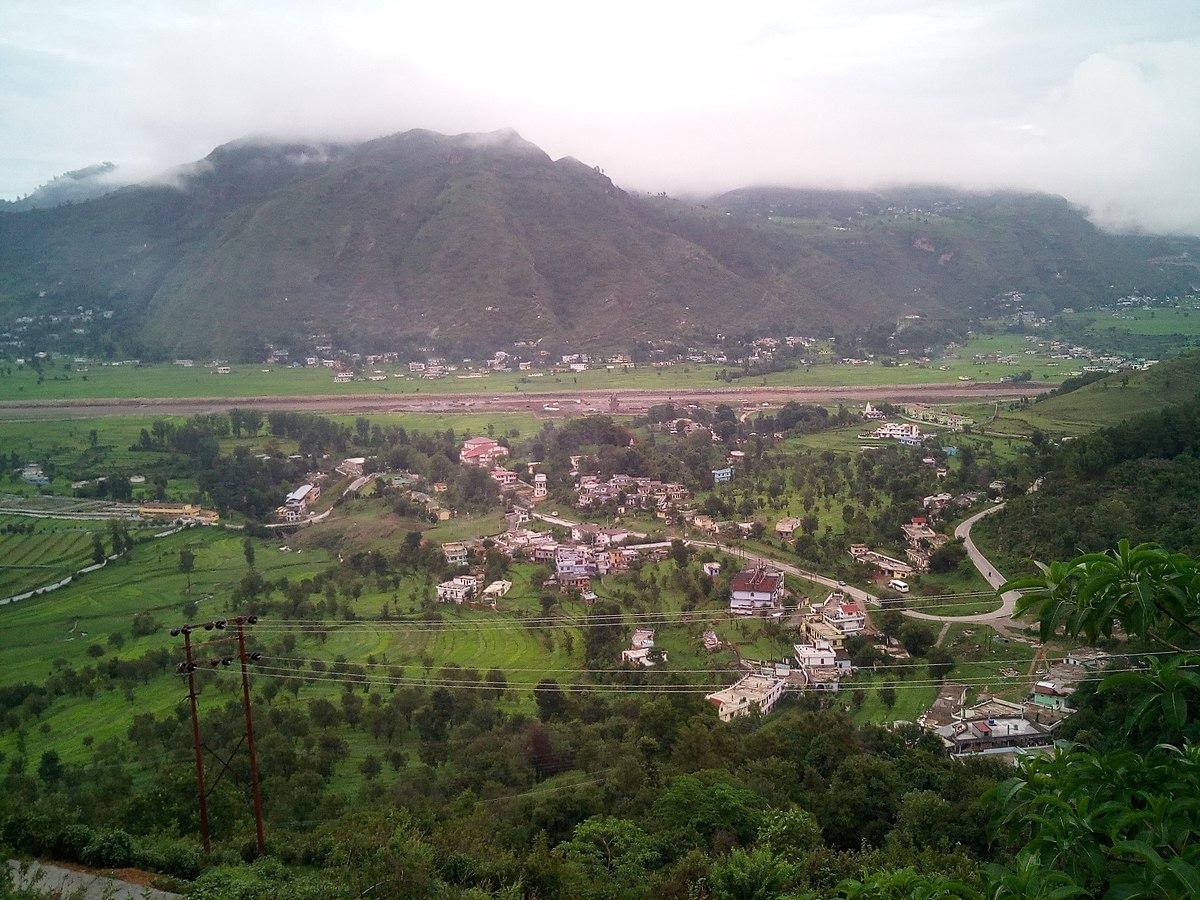 After the state of Himachal Pradesh, Uttarakhand is another northern area situated at the foothills of the majestic Himalayas. Pithoragarh is a district located in the Northeastern part of Uttarakhand state.

The land is full of rich biodiversity along with the beauty of the mountains and valleys of Uttarakhand. The beautiful valley provides the best view of the Himalayan range.

Uttarakhand recently increased its adventure tourism potential by introducing more and more areas for Paragliding. Pithoragarh is one of the most promising spots for paragliding in India where the adventure activity can grow into a professional sport.

There are many tour operators providing paragliding services at the cost of 6000 Indian Rupees. Pithoragarh is also one of the destinations where training programs for paragliding are also given. In the coming years, Pithoragarh has the potential to become one of the best paragliding places in India. 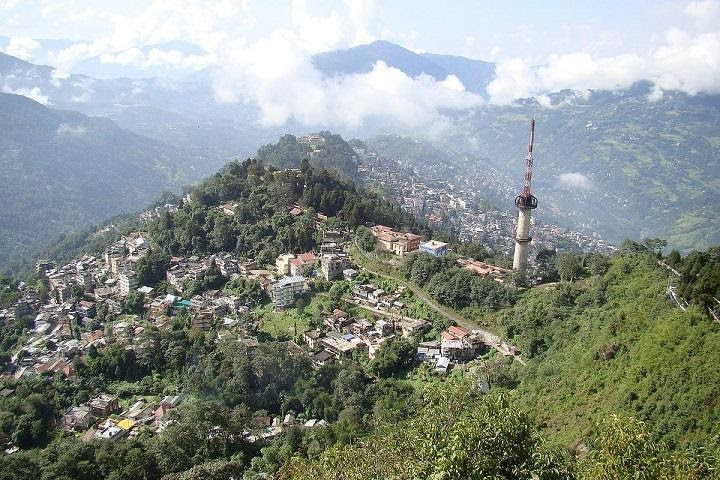 This famous travel destination is located in the Northeast Indian state of Sikkim. Sikkim has established itself as one of the hubs of adventure tourism. The land of Sikkim has many valleys, rivers, and mountains that are perfect for adventure sports such as rafting and rock climbing.

Gangtok in the past 5 years has shown an increase in Paragliding activities which attracts tourists from all over India. The location of Gangtok is one of the most adventurous paragliding places in India in the state of Sikkim.

Gangtok can be easily reached by air and by road. The summer season is the most ideal time to experience Paragliding in Gangtok. The starting cost of Paragliding service here is around 2000 Indian Rupees.

Also Read: Things to do in Rishikesh 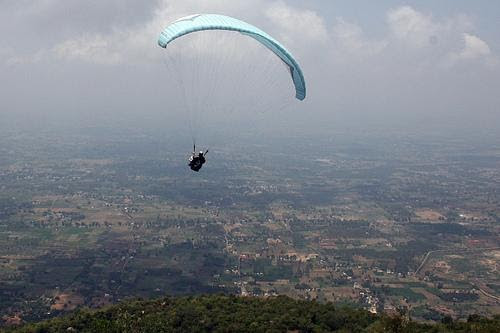 Yelagiri is located in the South Indian state of Tamil Nadu. This famous hill station is a hidden gem among domestic and international tourists.

This beautiful destination has established a Paragliding Club with dedicated instructors with the latest gear and equipment. Paragliding is still relatively new in Yelagiri. But the experience of Paragliding at this destination is very exciting because of the beautiful climate and the natural setting.

Yelagiri provides the best paragliding in India as far as the flying experience through nature is concerned. Yelagiri is situated at an ideal height with pleasant weather conditions which makes it one of the most promising spots for paragliding in India.

For beginners, only tandem flights are available here and the cost of Paragliding starts at 2000 Indian rupees. The best time to visit Yelagiri for Paragliding is from September to February. 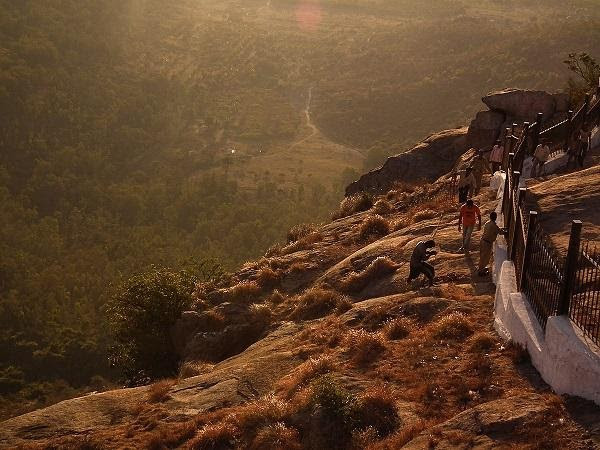 The beautiful hill-station of Nandi Hills is located near Bengaluru City. Nandi Hills offers some of the most beautiful scenes of nature. Sunrise and Sunset are particularly a spectacle to behold.

Nandi Hills has become a popular destination for paragliding in India. The tour operators are aggressively promoting the adventure tour packages which include Paragliding as the main attraction. The state tourism authority is also running tourism campaigns to promote adventure tourism in Nandi Hills.

Nandi Hills is situated at an altitude of 1400 meters and it provides the best sites for take-offs and landings. This destination is easily accessible by road and it is around 70 kilometers away from Bangalore airport.

Paragliding cost starts at approximately 1500 India Rupees and the activity is available from July till September. Nandi Hills has also recently become a famous destination for paragliding. Satpura in Gujarat is a newly developed site for Paragliding. Paragliding is a very new sport for the local people here. However, instructors are some of the best-trained experts in paragliding.

Satpura is dedicated to becoming one of the best destinations for paragliding in India. Among the tourists, Satpura has gained a significant number of tourists wanting to Paraglide in Gujarat. For many years now, the annual Paragliding festival has been the main attraction for adrenaline seekers from across India.

Satpura is home to Pavagadh Hill which is located in the district of Panchmahal. Pavagadh Hill is the take-off point for the paragliders who fly over the view of the amazing city of Champaner. From December to January is the most ideal time as the Paragliding Festival is in full swing during this time.

With many young people wishing to try out Paragliding in Gujarat, Satpura is one of the most adventurous paragliding places in India. The Paragliding Festival has been a key event in the promotion of Satpura as one of the best sites to paraglide in India.

The cost of Paragliding here starts from 3,000 Indian Rupees with Tandem flights available with the expert instructors to guide you.

India is rapidly coming up with adventure tourism initiatives to promote tourism in India. Many campaigns are being created to make India a perfect destination for adventure sports. After the COVID-19 lockdown measures, the tourism businesses were adversely affected. Due to this, the tour operators and the government are coming up with solutions to make travel safe for domestic and international tourists.

Along with the health and safety guidelines, many infrastructure solutions, and allocation of sites for tourism activities are underway. In the coming years, India will see a rapid rise in the Adventure Tourism market.