Visiting Kerala - Do Not Miss Visiting These 10 Places

Popularly referred as "God's own Country", Kerala, a state in Southern India is also known as a tropical paradise of waving palms and wide sandy beaches. Tourists from around the world are lured to this exotic narrow strip of coastal territory, that slopes down the Western Ghats in a cascade of lush green vegetation and reaches the Arabian sea, that offers them a variety of  spectacular sceneries and unforgettable experiences of tranquil beaches.

Kerala's culture and traditions, coupled with its varied demographics, have made the state one of the most popular tourist destinations in India. In 2012, National Geographic's Traveler magazine named Kerala as one of the "ten paradises of the world" and "50 must see destinations in a lifetime".

Ayurvedic tourism has become very popular since the 1990s, and private agencies have played a notable role in tandem with the initiatives of the Tourism Department. It is also known for its ecotourism initiatives which include mountaineering, trekking and bird-watching programmes in the Western Ghats as the major activities.

A Brief About Kerala

• The state's only drive-in beach, Muzhappilangad in Kannur, which stretches across five kilometers of sand, was chosen by the BBC as one of the top six drive-in beaches in the world in 2016.

• Idukki Dam, the world's second arch dam, and Asia's first is at Idukki.

Ponmudi, Wayanad, Wagamon, Munnar, Peermade, Ramakkalmedu, Paithalmala of Kannur district and Nelliampathi.Munnar is 4,500 feet above sea level and is known for tea plantations, and a variety of flora and fauna.

• The Kerala backwaters are an extensive network of interlocking rivers (41 west-flowing rivers), lakes, and canals that centre around Alleppey, Kumarakom and Punnamada (where the annual Nehru Trophy Boat Race is held in August), Pathiramanal a small island in Muhamma .

• Padmanabhapuram Palace and the Mattancherry Palace are two nearby heritage sites.

• Padmanabhaswamy Temple in the state capital of Thiruvananthapuram holds the record as the wealthiest place of worship in the world, with assets of at least Rs 1.2 trillion US $28 billion in 2019.

Best Places to visit in Kerala

Wayanad Is A Land Of Paddy Fields And Heart-Shaped Lake

Vagamon Is A Hill Station Famous For Endless Green Meadows

Best Places To Visit In Kerala 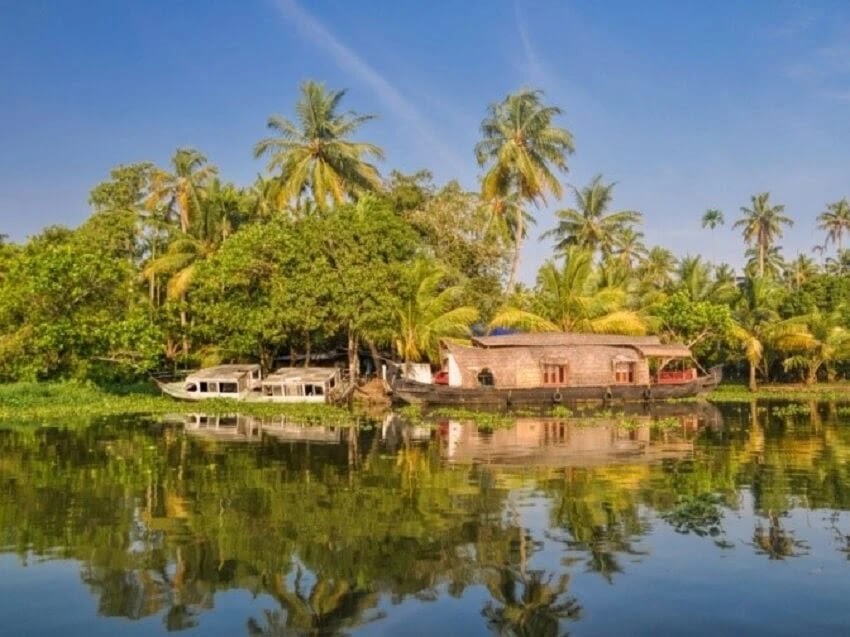 A Traditional Kerala Houseboat In Backwaters At Alleppey In India

The fascinating backwaters in Alleppey, dotted with green paddy fields and palm trees, make it the best backwater destination in Kerala. A houseboat stay can be made the highlight of your trip while discovering the charm of backwaters of Kerala with a leisurely cruise along its canals.

Explore local villages and see villagers going about their routine chores as you drift away on a serene journey. Also if you are considering a honeymoon trip to this place ensure that a visit here is included in the cheapest Kerala tour package chosen by you.

Your thirst for a beach holiday beyond the backwaters of Alleppey too can be realized by a visit to the nearby Alappuzha Beach. The lighthouse on the beach is a popular tourist place. Adding to Alleppey’s charm is also the traditional Nehru Trophy Snake Boat Race that takes place on the Punnamada Lake in August every year. 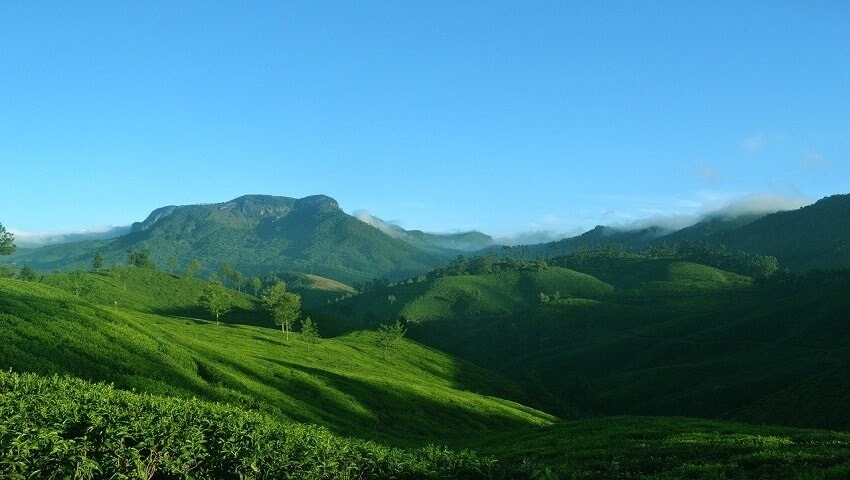 Munnar is the most popular hill station in Kerala located in Idukki district. Once the summer capital of the British, Munnar is now famous for its lush tea plantations and the tea museum. Experience endless sloping valleys of greenery, while waking up to the smell of refreshing tea leaves during your stay in at a tea estate in Munnar.

In addition to this it is also a site, for wildlife enthusiasts, to visit, as spotting elephants and the endangered mountain goat, Nilgiri tahr, is common at the Anamudi peak in Munnar. The Elephant Lake is another popular place, in Munnar, where you could find a herd of tuskers, in a natural environment.

If you’re lucky, you might just wake up to some elephants walking through the tea plantations. So, if you are looking for some picturesque places to visit in Kerala, insist on the inclusion of a visit to this marvelous place in the Kerala tourism packages chosen.

Summer: March to May,

Also Read: Why Take A Family Trip To God’s Own Country, Kerala? 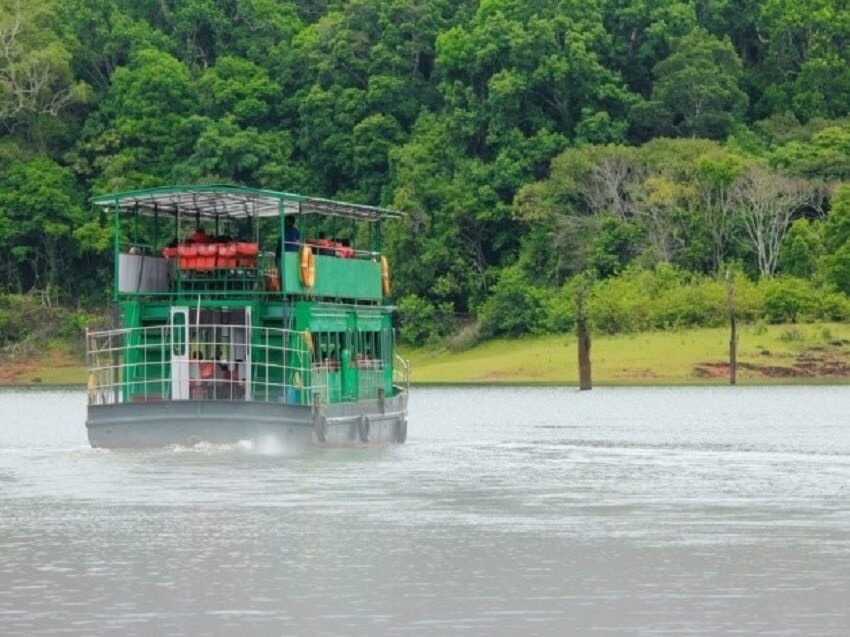 Thekkady is one of the best forest tourist places in Kerala which is home to wildlife like elephants, bison, deer, Nilgiri langurs and tigers. The sighting of animals, birds and reptiles is common while cruising along the length of the lake in a tourist boat, so choose wisely and add a visit to Thekaddy, to your Kerala tour package.

Further it is also suggested to keep a pair of binoculars handy to spot the unusual. The lush greenery of the forest and the calm water invariably has a soothing effect on you.

Periyar National Park, a tiger and an elephant reserve, where you can go on a jungle jeep safari, is also forms a part of Thekaddy. Treks along the Tiger Trail, bamboo rafting, camps and midnight safaris are also organised for those looking for more adventure.

Wayanad Is A Land Of Paddy Fields And Heart-Shaped Lake 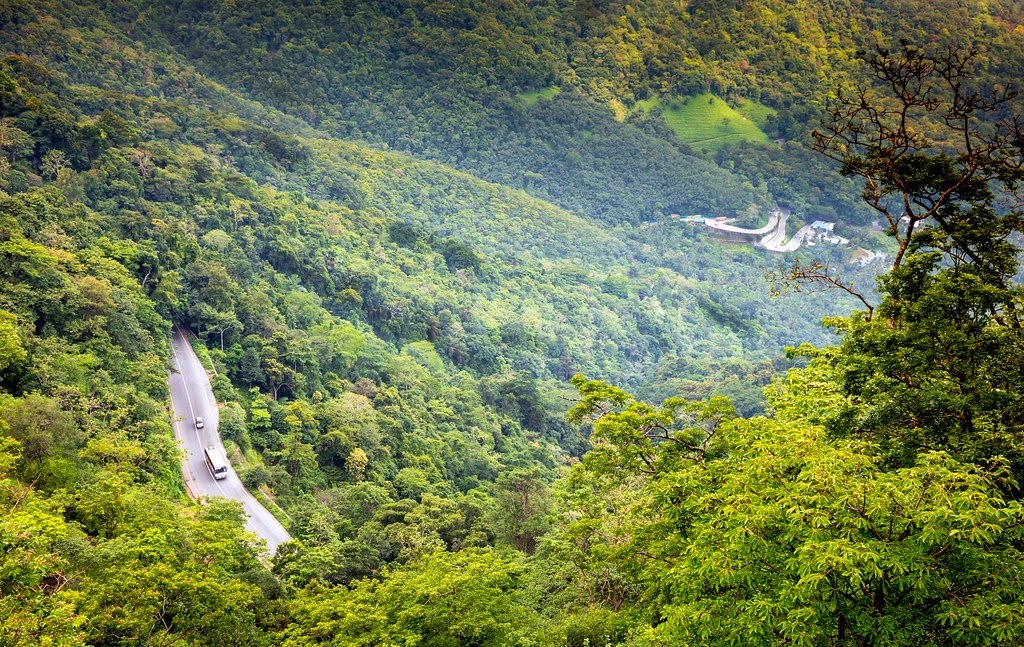 Being a pleasant hill station, Wayanad is one of those locations in Kerala that you can visit throughout the year. Wayanad meaning ‘land of paddy fields’ offers you a lush landscape dotted with rice paddy fields,  betel nut trees, coffee plantations and bamboo forests, inclusion of a visit to Wayanad, in this case, becomes a must when selecting one out of the multiple Kerala tour packages for family.

What makes it still more interesting is the fact that this place also has caves with rock and wall carvings belonging to the Neolithic and Mesolithic ages, making it one of the most exotic tourist places in Kerala. A great place to spot wildlife, especially wild elephants, Wayanad Wildlife Sanctuary is a part of the Nilgiri Biosphere Reserve and one of the forest places to visit in Kerala. 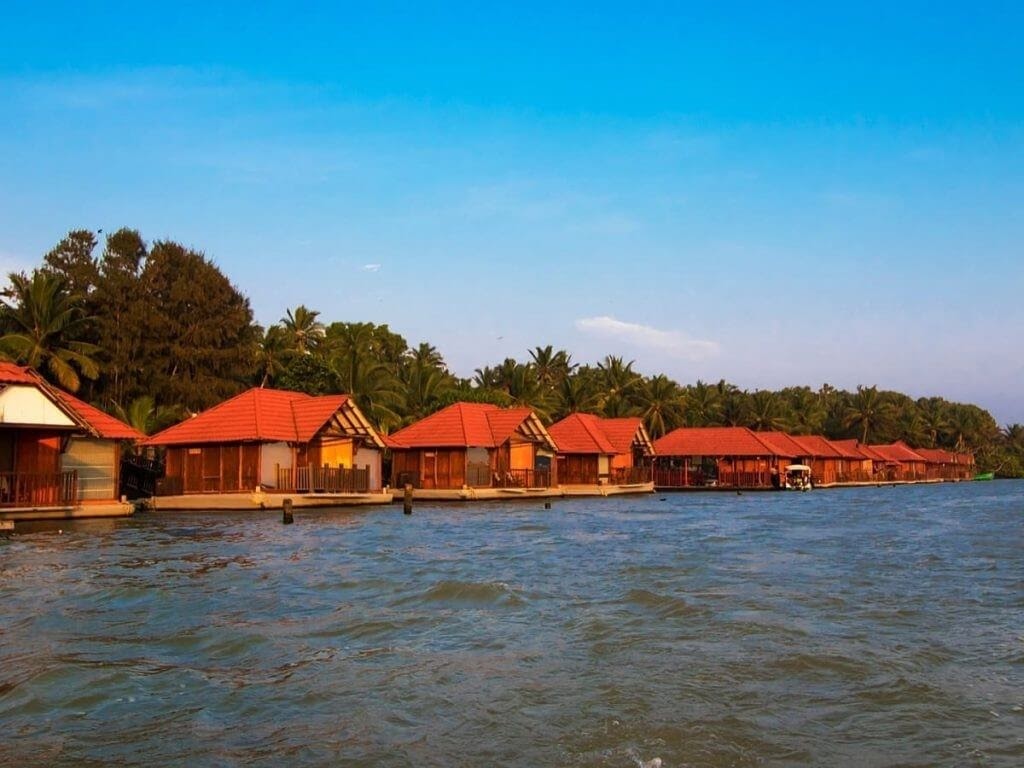 Poovar Is The Only Estuary In Kerala Where Lake, River, Backwaters And Sea Meet

If you are looking for offbeat places to visit in Kerala, this little island located between the Arabian Sea and the Neyyar River is where you should be heading to! Thus make sure that the package, off the Kerala tourism packages selected, is the one that includes a visit to this marvel of a place.

What makes Poovar stand out is that it’s an estuary where the beach, island, river and sea meet. Its golden sands, calm waters, unique flora and fauna make it one of the best tourist places in Kerala

Wake up to the sound of the sea by booking your stay in a floating cottage. Go boating through the dense mangrove forests or simply gaze at the horizon for hours to unwind and destress. Many island resorts in Poovar also offer Ayurvedic treatments for your well-being. Check out these places to visit in Poovar Kerala.

Vagamon Is A Hill Station Famous For Endless Green Meadows 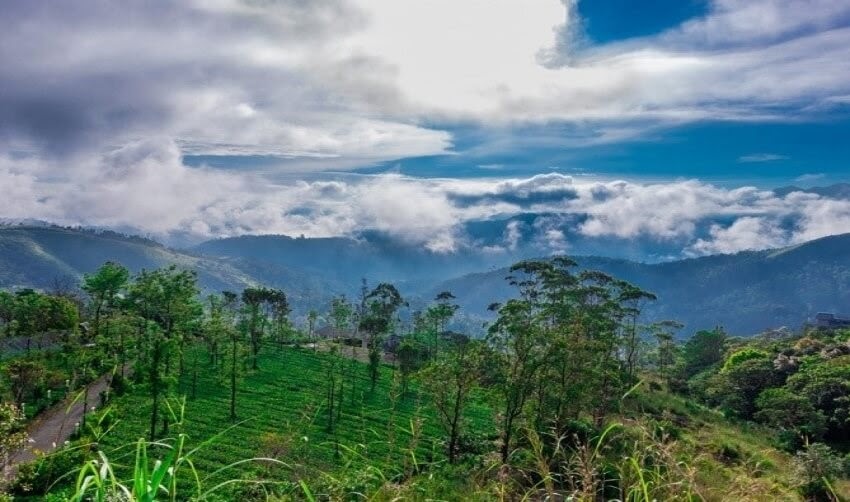 Quite often, a traveler venturing into an otherwise hot state, expresses concern if the tour package chosen, from a selection of the Kerala Tour Family Holiday Packages, by him, includes a visit to a hill station, expecting a visit to cooler terrains, he can be advised to include Vagamon, to his itinerary, which is an idyllic hill-station dotted with meadows and pine-forests.

Vagamon’s three hills, Kurisumala, Thangal and Murugan are said to represent the Muslim, Hindu, and Christian faiths! Misty hills, tea plantations and endless meadows in Vagamon form a beautiful canvas for your travelogue.

You can also get adventurous at Vagamon as it offers the perfect backdrop for paragliding training, rock climbing activities and hill-top camping amidst the clouds. Overall, Vagamon is the best family holiday destination in Kerala. 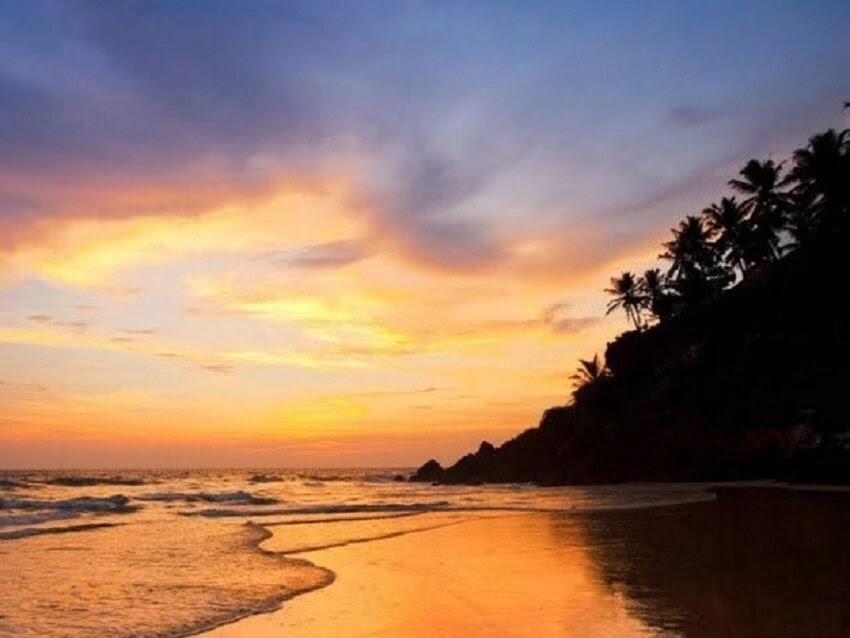 When someone asks ‘What are the most beautiful beaches to visit in Kerala?’, when going on the cheapest Kerala tour package, the first answer is definitely Varkala! It is the only place in Kerala where you can find enticing cliffs by the sea, which makes Varkala beach stand out from the rest of the beach destinations in Kerala.

Varkala is also known for water sports like parasailing and windsurfing because of its long tides and favourable weather.

One of the best things to do in Kerala is seeing the romantic sunset at Papanasam beach in Varkala. It is a beautiful experience to bring in with your loved ones. If you are lucky enough, you might also spot a few dolphins frolicking around in the sea. When you want to soak in some sun and sand in God’s Own Country, Varkala is where you should be heading. 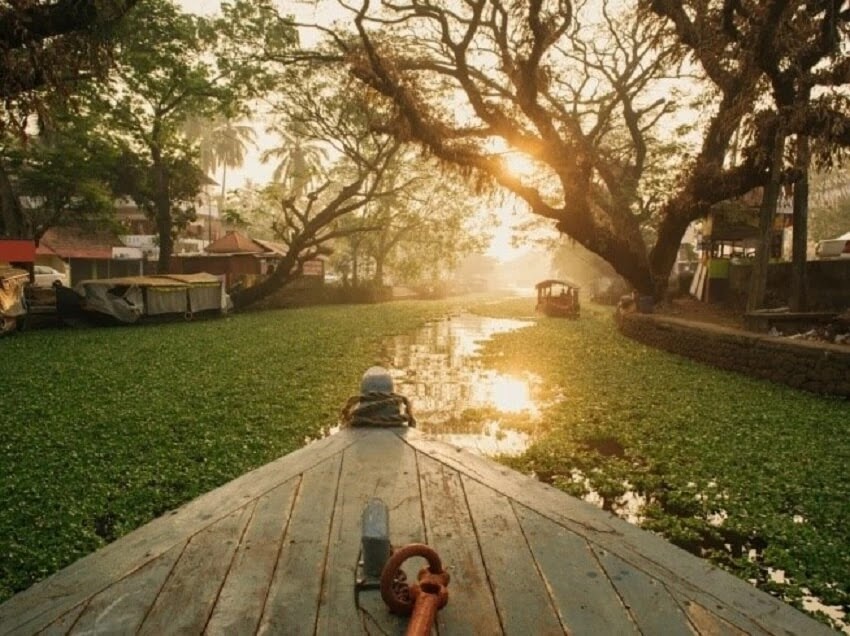 Ever heard of a place below sea level? Well we have one such place for you in Kerala which you must visit with your family when travelling on one of the Kerala Tour Family Holiday Packages. It is a place popularly known as the ‘Rice Bowl of India’, Kuttanad.

It is one of the few places in the world where farming is done below sea level, and is a fertile region where four major Kerala rivers flow in. Owing to its unique landscape, Kuttanad is one of the top places of interest to visit in Kerala, and experience the lush paddy crops, swaying palm trees, farmers working with their sickles, ducks in the water and the wind in your hair as you enjoy a laid-back backwater ride.

Located in the interiors of Alappuzha, Kuttanand offers you houseboats, homestays and hotels along the water banks as accommodation options. It is also interesting to be a part of the local activities to see coir making and toddy tapping. Kuttanad is a dreamy destination for those who love a laid-back vacation. 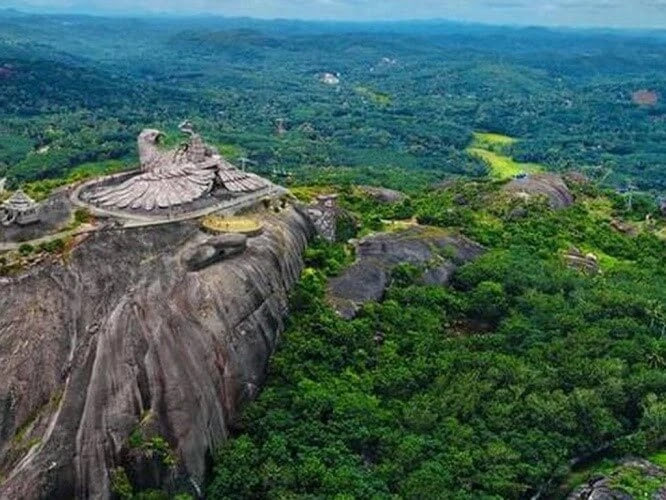 Located on the Malabar coast and home to serene backwaters, Kollam is a place of historical significance and natural beauty. It has been mentioned in the travelogues of legendary travelers like Ibn Batuta and Marco Polo and regularly features as one of the best places to visit in Kerala

One of the highlights in Kollam is the 8-hour houseboat ride from Ashtamudi to Alappuzha, which offers enchanting views of the landscape. If you love beaches, you can unwind at Kollam Beach, Tangasseri Beach and Thirumullavaram Beach, when in Kerala on one of the Kerala tourism packages.

Among the best-unexplored places of Kerala is Jatayupara Earth’s Center in Kollam which is themed on the Hindu mythology, Ramayana and has an enormous statue of the mythological bird, Jatayu.

A very brief account of some of the best places to be visited in Kerala or in India has been drawn up, as above. This is definitely not the be all and the end all. There are a plenty of more places that one can visit on his tour of Kerala, offering him or her or a family an experience of a life time.